The HQ Ion is currently my favorite kite to fly, hopefully this little post will help you understand why, and see if the Ion is right for you.

My first encounter with serious kites was in a kite store on Galveston Island on the Texas coast called Kites Unlimited. Like most people who visited the island I had seen their kites flying in the wind above their store. I was never really interested because as a child, kite flying at best was holding a string looking at something suspended in the air and more commonly entailed lots of running, lots of crashing, and no flying.

Once I went in to the store however that changed. Not only were there kites like I remembered as a child but also big, colorful, high-tech stunt kites you could actually fly around and do tricks with! This was cool. They even had a selection of stunt kite supplies such as line, wrist straps and tails, as well as some stunt kite parts.

From almost the moment I walked into the store there was one kite that caught my eye, the HQ Ion Stunt Kite in blaze (red, yellow and a gray carbon fiber pattern). One look at the price tag of $160 told me that the Ion would not be my first two line sport kite.

After purchasing a much cheaper version and flying it for many months (and several crashes which it survived with little more than a rip which my wife sewed back together) I thought I was finally ready not only to be able to fly the HQ Ion Stunt Kite, but to pay that much money for a kite. Back to Kites Unlimited I went, then straight to the beach to fly my new toy. 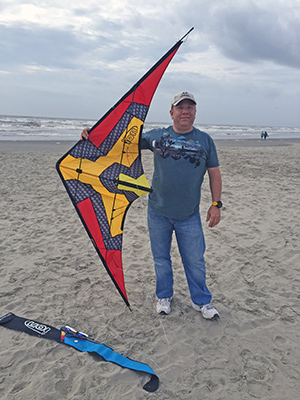 The HQ Ion Stunt Kite is not very well suited to low wind conditions which I discovered the second time I went to Galveston to fly it. If you are in less than 10mph winds the kite might fly but it will be less than thrilling and very frustrating trying to launch the Ion. On the other hand, you find a really windy day with 30mph winds and not only is it enough work to leave your entire body sore the next day, but it is so much fun even your face will hurt from all the smiling.

Since I now have a collection of kites for all types of flying conditions I use this one most for the really windy days. Funny thing is that I tend to watch the beach weather forecast pretty closely hunting for those high wind days where I can pull the HQ Ion out and wrestle with the winds. Just a couple of weekends ago I was out on the beach in 50F weather (pretty much alone, heh) in winds from 25-30MPH (felt freezing cold) having so much fun it should have been illegal.

So how does the kite stack up? Excellent. 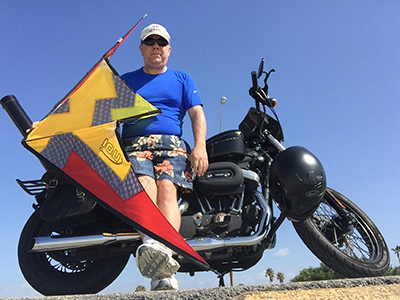 The build quality and finish of the seams is top notch. It comes in a heavy duty nylon carrying case that unfolds so that once you assemble the longer edges of the kite you do not have to take them back apart to put it in the case.  I tend to completely disassemble the kite however since I carry it occasionally in a tube mounted on my motorcycle and a long enough tube to hold the unfolded kite would simply be too long. It also fits better in the back of my wife’s MINI Cooper convertible.

So far my HQ Ion kite probably has twenty to thirty hours of flight time on it, several “crashes” into the Gulf of Mexico (many of which it relaunched without my having to retrieve it), and one low speed crash into the sand. One strut has been shattered but that was because while it was in the car something fell on it, crushing the carbon fiber component.

The HQ Ion is easy to launch, easy to control, and more stable than I would believe for something meant to use in this much wind. Even after being dunked in the water it flies effortlessly.

The lines, straps, and winder the Ion comes with are all more than adequate for the kite and for the price paid. I like the fact that it comes with two different colored wrist straps so I always know the red one is for the right side. Really this doesn’t matter but I am still new enough to this that it matters to me. 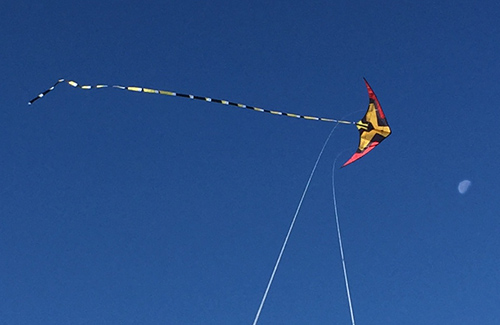 Currently I have a fifteen foot streamer (yellow, black, and white) that I attach to a key ring I put in the center tail section (there is a great place for this already on the kite). The kite will easily turn a tight enough circle that the nose of the kite can touch the tail of the streamer. It also has no problem flying with the streamer on it and makes flying the kite just that much more fun.

Conclusion for the HQ Ion

I guess the bottom line here is that if anything happened to my Ion I would not hesitate to purchase a new one. On the trip where I discovered that I had a broken strut and went to Kites Unlimited I was ready to buy a new HQ Ion right there on the spot, instead they repaired the one I had because they are just awesome like that. In addition, I am adding several other HQ kites to my stable as I like the quality I see in my Ion and from what I can tell HQ is one of the top kite manufacturers along with others such as Prism kites. I suppose that is the best accolade I can give it.

Get more information or get your own HQ Ion Sport Kite on Amazon!

Thanks for looking at my review of the HQ Ion stunt kite!

Please support this website by adding us to your whitelist in your ad blocker. Ads are what helps us bring you premium content! Thank you!